ALL THE YEAR ROUND BOWLS - INDOOR AND OUTDOOR

We will initially, be running steward sessions each day limited to 18 members per session

Erdington Court's Paul Vaughan and Mark Ireland were crowned Warwickshire Indoor Bowls Pairs Champions on Saturday. They got off to a rocky start at Birmingham Indoor Bowls Club and were 10:2 down at the half way stage. However their resilience shone through and they took the game 17-14. 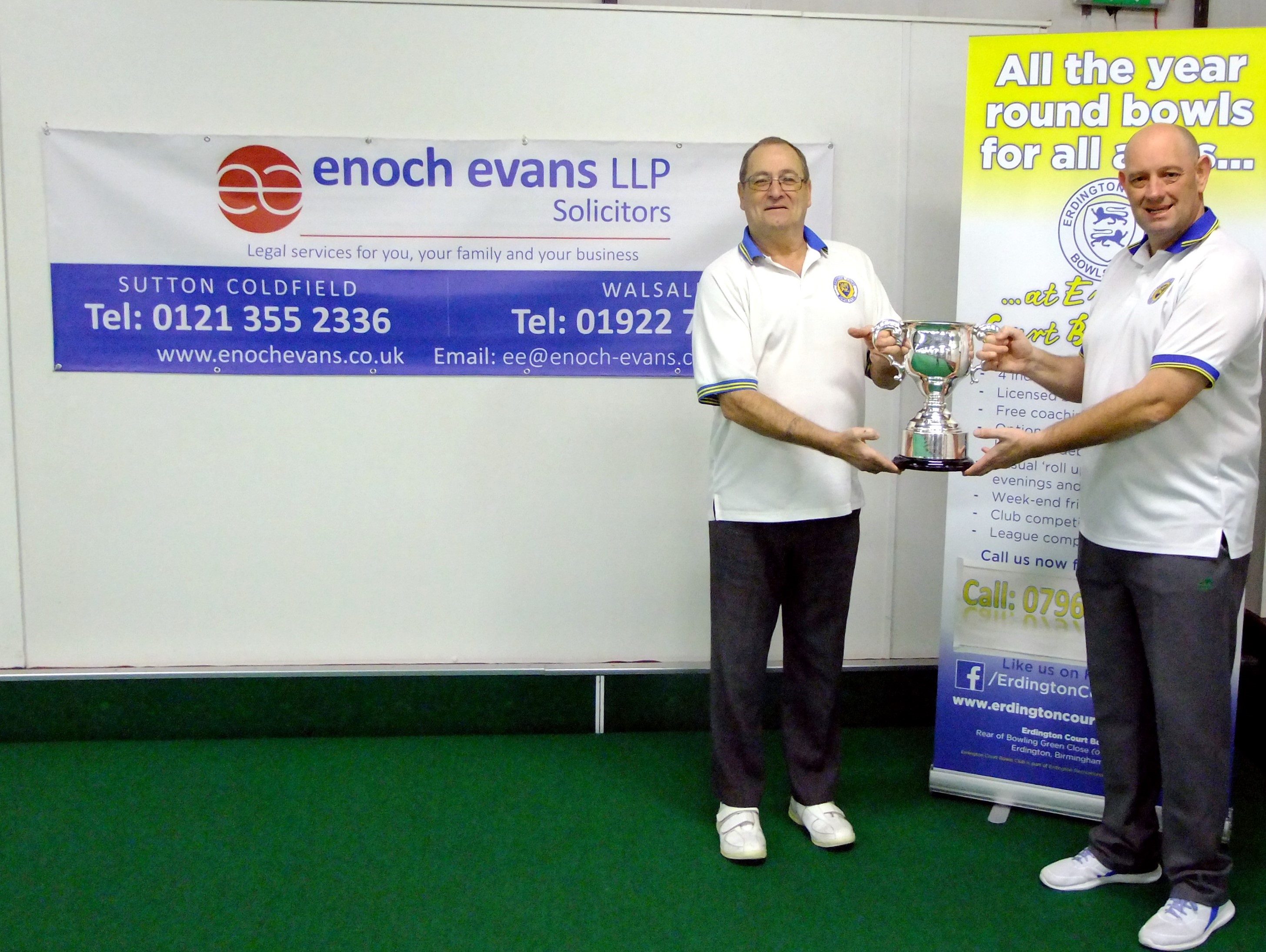 Erdington Court Bowls Club was able to top off the indoor season by announcing their 10th local sponsor - Enoch Evans LLP confirmed that they would be joining other local businesses who have shown their sport for this growing Club in recent years.

"Supporting the local communities surrounding our offices and working with...

ANOTHER HOME WIN FOR ERDINGTON COURT

It was another solid home win for Erdington Court at the week end. This time they beat Tamworth at the Court's Bowling Green Close arena by 74:54. Erdington's stars of the day were an all female squad led by Ruth Acum from Great Barr. Together with team mates Mary Webster- Walmley, Joan Garner -  Sutton Coldfield and Pam Ellis - Streetly  they won 24:7.

The Court's pair in the Warwickshire Champion of Champions- also held at home,pulled out all the stops, to beat Birmingham by...

In the latest round of a prestigious Warwickshire Indoor Bowls Association competition, Erdington Court won the tightest of contests at their Bowling Green Close arena.

The Warwick trophy features 8 man squads from across the County. At home to Welford On Avon, the Court won by a single point on each rink. After games lasting over 3 hours, the scores were 15:14 and 25:24 - giving the Court maximum points.Tamworth currently head the League.

At a time when most were recovering from Christmas Day, a new member of Erdington Court Bowls Club walked away with the honours - in a traditional competition that has been taking place for over 40 years!

Dave Wright from Minworth fought off all - comers in the Club's Jarrod Morgan Boxing Day morning competition, to claim the brand new trophy provided by the sponsors. The competition took over 2 hours and involved ove...

SANTA COMES TO THE END OF THE ROAD AT ERDINGTON COURT

Not only did 'Strictly' reach a climactic final on Saturday, but Erdington Court's 3 week competition organised by Peter and Terry Yates from Sutton Coldfield also produced 4 winners!

The 'Road To Santa' sponsored by Star Cars and Coaches of the Yenton - who have more than 250 private hire drivers, involved over 30 Court Club players, with Star donating a large number of prizes.

The Cup for the winners was presented by Garry Kilday Marketing ...